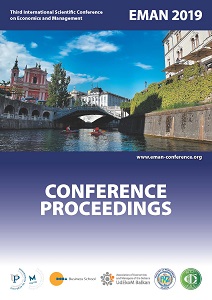 USE OF INFORMATION AND COMMUNICATION TECHNOLOGIES IN HOTELS

THE ROLE OF THE ACADEMIC LIBRARIANSHIP IN THE ECONOMIC DEVELOPMENT: EXPERIENCE FROM SERBIA ON THE THRESHOLD OF 2020

HUMAN FACTOR AND METHODS OF GOVERNMENT AND BUSINESS MANAGEMENT

TECHNOLOGY IN AN ERA OF GLOBALIZATION

THE PROFITABILITY OF WATER COMPANIES DURING TEN YEARS

TEACHING MEDIATION BY MEANS OF AN ONLINE PLATFORM

THE SUPPORT OF INTERNATIONAL INTEGRATIONS AND INSTITUTIONS

PROCJENA EFIKASNOSTI VISOKOG OBRAZOVANJA U EU-28
(EFFICIENCY OF HIGHER EDUCATION IN THE EU-28: A COMPARATIVE ASSESSMENT)

EMPLOYEE’S PERFORMANCE AS A RESULT OF SATISFACTION, INNOVATION AND EMPOWERMENT BY MANAGERS

THE STAKEHOLDERS: A COMPARISON BETWEEN IAS/IFRS AND ITALIAN OIC STANDARDS FOR FINANCIAL REPORTING

WORKPLACE BEHAVIOR AND COMMITMENT TO THE ORGANIZATION

ETHICS OF THE LEADER – AN ESSENTIAL CONDITION FOR BUSINESS SUCCESS

POST-TRUTH ERA AND VESTED INTERESTS IN APPROACHING ECONOMY IN FINANCIAL NEWSPAPER HEADLINES AND LEADS. NEWSWORTHINESS QUOTA IN THE CASE OF PROGRESSIVE TAX VERSUS FLAT TAX IN THE ROMANIAN DAILIES ZIARUL FINANCIAR AND FINANCIARUL

INTERNAL AUDIT OF COSTS IN A PUBLIC EDUCATIONAL INSTITUTION

ODLUČIVANJE U SAVREMENIM USLOVIMA
(THE DECISION MAKING IN CONTEMPORARY CONDITIONS)

THE IMAGE MANAGEMENT STRATEGY THROUGH SOCIAL NETWORKS. AN ANALYSIS OF THE BANKING ENVIRONMENT IN ROMANIA

ORGANIZATIONAL INNOVATION AND FIRM PERFORMANCE: A STUDY OF ALBANIAN FIRMS

THE STATIC AND DYNAMIC EFFECTS OF EUROPEAN INTEGRATION

DOES TECHNOLOGY WIN OVER HUMANS?

THE INFLUENCE OF PRODUCT LIFETIME ON REMANUFACTURING OF VEHICLE COMPONENTS

LEASING CONTRACT – SIMILARITIES AND DIFFERENCES WITH THE CONTRACT OF RENT

THE HUMAN – ROBOT COLLABORATION STAND IN A UNIVERSITY LAB