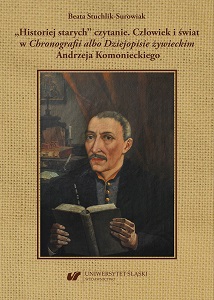 Author(s): Beata Stuchlik-Surowiak
Subject(s): Studies of Literature
Published by: Wydawnictwo Uniwersytetu Śląskiego
Keywords: Andrzej Komoniecki; Żywiec; Chronography; chronicle; customs; nature; disease; law;religion;
Summary/Abstract: The book familiarizes the readers with the content of a chronicle, little known not only to average readers but even to researchers, written by the mayor of Żywiec Andrzej Komoniecki (1659–1729), entitled Chronography or the History of Żywiec. The chronicle illustrates the events that took place in the years 1400–1728, primarily in Żywiec and its vicinity, but also in other regions of Poland, and even beyond its borders. In addition to the concise, one-sentence, one-page notes, we find here extensive descriptions of the historical circumstances. Apart from Polish, the chronicle also contains notes in Latin. The text is written in prose, but there are also poems written by Komoniecki himself. A similar richness is also brought by the thematic layer of the work, on the pages of which both the great men of this world–rulers, bishops, hereditary lords – as well as common citizens and even people from the social margin are immortalized. The text of the Chronicle is not fully original; its first part, from the beginning to the year 1586, was (with small exceptions) rewritten from the Polish Chronicle of Marcin and Joachim Bielski, and in addition, the author also used other sources. The most interesting and original fragments are those that refer to Komoniecki’s times, because they contain many valuable descriptions and observations and subjective emotions.The author showed the everyday life of his ancestors, as well as contemporary people, in many different aspects. The central object of the chronicler’s interest appears to be a man whose fate is determined by four powerful forces: nature, disease (and death), religion and law. Within each of these spheres, the mayor of Żywiec recorded above all spectacular and exceptional events, deviating from the routine of the everyday life and destroying the predictable everyday life. Great History has also left its mark on Komoniecki’s work. However, it is recalled in passing, for the sake of documentary accuracy, and constitutes only a background for the events that the chronicle considers most important. As such, Komoniecki focuses on the local events. Thus, the real “master” in the chronicle is not the king, but the local heir, and the attention of an average inhabitant of Żywiec is focused on pests threatening cabbage crops much more often than on subsequent wars, elections, parliaments or coronations.A similar approach has been used in this book, in which the political subject matter of Chronography is discussed in a very narrow scope and appears only when it has a direct connection with the main aim of the research, which is to reconstruct the reality of life of an inhabitant of a small town (predominantly of Żywiec, but also of the surrounding villages and towns) in the era of the First Republic. The content of the Chronography has been presented in the context of other source texts from the researched period, set against the background of the old Polish chronicle tradition, and confronted with the results of contemporary scientific research.