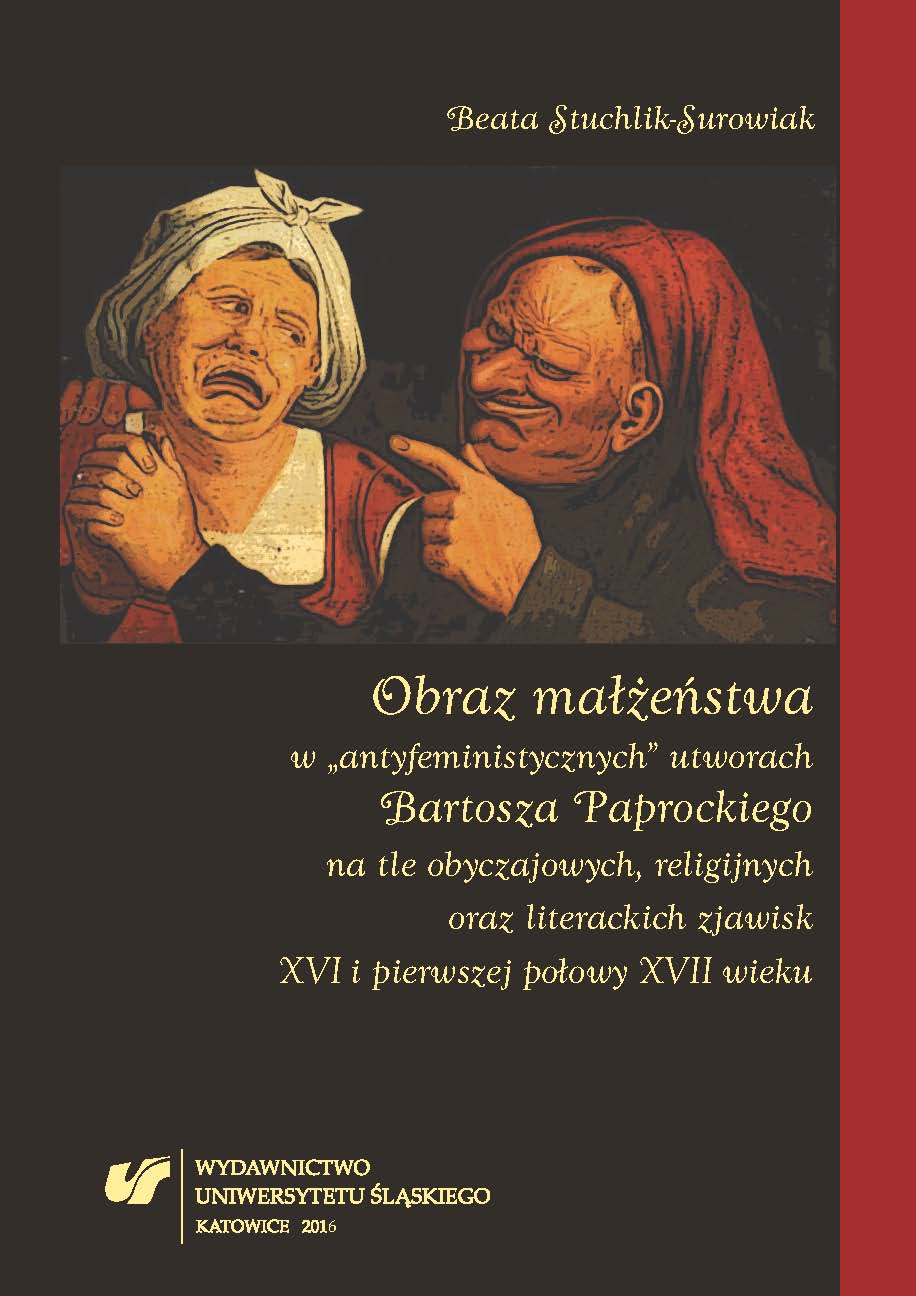 Author(s): Beata Stuchlik-Surowiak
Subject(s): Christian Theology and Religion, Language and Literature Studies, Studies of Literature, Polish Literature, Family and social welfare, Theory of Literature
Published by: Wydawnictwo Uniwersytetu Śląskiego
Keywords: marriage; male-female relationships; antifeminism
Summary/Abstract: The book outlines the life and work of Bartosz Paprocki, a heraldist and poet of the turn of the sixteenth century. The writer is well-known in the Czech Republic, where his writings have regularly been reprinted and where his life and work have been discussed in many scholarly articles. In Poland until recently he has received very little attention as a rather mediocre author, who cannot be compared to such prominent figures as Rej or Kochanowski. However, in recent years the interest in Paprocki’s work appears to have been growing, its focus being mostly on his heraldic texts, such as Herby rycerstwa polskiego (Coats of arms of Polish knighthood). The focus of this work is Paprocki’s occasional writings, in particular his poems on the subject of marriage and male-female relationships, such as “Dziesięcioro przykazanie mężowo”, “Próba cnót dobrych”, “Nauka rozmaitych filozofów około obierania żony” and “Nauka i przestrogi na różne przypadki ludzkie”. So far, in the scholarly tradition they have been interpreted as “antifeminist”, with their author frequently described as “the enemy of women.” This opinion is based on the fact that all these poems contain the motif of cruelty towards the wife. Indeed some of them are organised as collections of recipes and tips how to punish and beat a bad wife. While classifying these works as didactic writings, scholars have attempted to demonstrate that Paprocki’s declared animosity towards women originated in his own marriage troubles — he was married to Jadwiga Kossobudzka, a rich widow older than himself, who turned out to be dominating and quarrelsome, which purportedly made him flee from home. The present book departs sharply from this interpretation of his poems and aims to show that most of the “antifeminist” motifs derive not from the author’s personal experience but from humorous writings by “picaros” and members of the so called Babin Republic. This type of literature contains many motifs which are similar to those used by Paprocki, that is beating and battering the wife by the husband; they are, however, to be read as jocular rather than didactic and moralising pieces. This view is confirmed by the differences between various editions of Paprocki’s writings, which have so far been ignored. It has long been known that his marriage theme pieces were published many times during the 16th and 17th centuries. However, it is only after a thorough analysis of these editions carried out by the author of this volume that it became evident that the texts actually substantially differ. An analysis of the earliest editions shows that Paprocki often interspersed them with tips which were to help the reader to realise that the text was in fact a literary joke. Thus, the only plausible context for the interpretation of “antifeminist” motifs in Paprocki’s writings is Old Polish humorous literature. The motivation for this type of literary activity undertaken by the respectable author of “Herby rycerstwa polskiego” must be sought in his ceaseless pursuit of wealth, which was indeed his obsession, as he himself admitted many times in his various works. The marriage theme seemed particularly well suited for that purpose, in particular its humorous variations, which were very remote from the customs and norms of his time. This made his poems much sought after and widely-read, bringing their author a comfortable income.