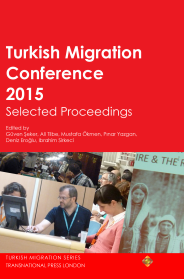 Economic and Financial Aspects of Forced Migration from Bulgaria in 1989

Continuity or Change in Turkey’s Mass Migration Policy: From 1989 émigrés to Syrian “guests”

EU-Turkey Readmission Agreement: Not a "Carrot" but More a ‘?’

Combating Fraud as a Disincentive of an Unintended Economic Migrant: A Comparative of the Direct Turkish model and the Indirect Australian Model

Migration Policy and Migration Management of Syrians in Turkey

Local Perceptions on Syrian Migration to Turkey: A Case Study of Istanbul Neighborhoods

Refugees of a City: The Socio-Spatial Impacts of Those Syrian Refugees who Arrived in Izmir, Turkey

The Fear of "What They Say": How Gossip Regulates Sexual Exploration among Migrants in Europe

Analyzing Turkish Labour Migration to Europe via SWOT and STEEPLE

The Social Life of Remittance Houses: Scenes from Rural Kayseri

Class Disguised as Ethnicity: Association of Turkishness with Small Food Businesses in Germany

The Integration of Immigrants in Rural Communities: An Example of City Council’s Approach Towards Turks in France

The Controversy Surrounding the Construction of Mosques by Turkish-Muslim Organizations in Austria: A Multidimensional Analytical Framework

Turkish Mosques in Britain as a Religious Socialization Agent

Psychological Processes of Acculturation of Turkish/Muslims in Germany

Delineating the Geographical Mobility of African Immigrants Towards Greece: Between Transnationalism and Integration

Tracing Deep Scars of 1915 in Art and Literature

Community Building in Diaspora through Political Engagement Forms: Case of Kurds from Turkey in Marseille, France

The Kurdish Community in the Czech Republic and Its Transnational Practices

Transnational Spaces between Dersim and Vienna

Spatial Segregation and Politics of Equilibrium in Mersin: Unintended Consequences of Forced Migration

Understanding Empowering Effects of the Kurdish Diaspora on Women’s Agency in Sweden: An Ontological Paradox

What Exile Brings Along: Signs of Migration and Exile in the Novels Yezidin Kızı, Sürgün and Nilgün