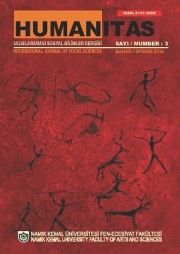 Summary/Abstract: This article focuses on the implicational function of costume and accessory in Les Bonnes, Le Balcon, and Les Paravents, three plays by Jean Genet, one of the major representatives of the Absurdist Theatre that flourished in 1950s. We have tried to give precedence to the implicational approach in his plays, since his style of narration is based on non-lingual signs, rather than lingual signs. In Genet’s drama, the light, costume, color, music, sound or/and silence are the styles of narration that are sometimes disguised, sometimes explicit. These elements are pretty much functional in catharsis; alienation and implicational approach that the writer wants to create. We have tried to explain the symbolical roles of costume and accessory in the plays. When the common idea of theatre in this period and Genet’s style are considered together, the roles and the meanings of the symbols of stage costume and accessory become richer. It is obvious that these elements stand for the disguised and untold actions on stage. Absurd theatre presents the pathetic condition of human in the capitalist political system, his fear and anxiety. It problematizes all forms and values by subverting the traditional theatre structure. The aim is not to give a direct message, the solution and conclusion being left to the reader. An active connection is constructed between the audience and the play. During the performance, the audience is a part of the play.