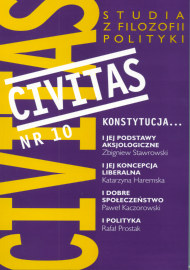 Obywatel a globalizacja
The citizen and globalisation

Summary/Abstract: The placing of the concept citizen in the context of globalisation makes it possible to approach it using the category of cosmopolitism and the related dispute between the advocates of pluralism and those of hegemony. In the debates on cosmopolitism, the transition from the classic concept of 'citizen.' to that of 'citizen of the world', or cosmopolite, is generally regarded as something obvious, just as is its territorial extension. The concept of the citizen thus becomes transcendental and virtual. Usually its Greek roots are pointed to, as cosmo-polites is derived from the word cosmos, an ordered world, the universe and polites, a citizen. The historians of concepts are, however, right to point out that in its original form, that is, among the cynics and the stoics, the word cosmopolites was understood in a philosophical and moral rather than in a political sense. It was a deliberate rejection of polis as a specific place and a specific political order, in favour of a universal space and natural law. Humans, as inhabitants of the universe, are subject only to the authority of the world-penetrating logos, the principles and laws with which they were able to become acquainted by applying their own rationality; this very capability was an obligation to observe those principles and laws and to comply with them. Because of its very nature, the concept of a cosmopolite is thus apolitical, or, in other word, not uncitizen-like.

Justice as Aletheia Justice as Aletheia 2009 Komu potrzebna jest dzisiaj fi lozofi a polityki? Who needs the philosophy of politics today? 2011 O rewolucji raz jeszcze... On revolution once again 2013 Kultura polityczna: czy tego można się nauczyć? Political Culture. Is It Something We Can Learn? 2016 Secret organisations and their overt politics Secret organisations and their overt politics 2017
2023 © CEEOL. ALL Rights Reserved. Privacy Policy | Terms & Conditions of use
ICB - InterConsult Bulgaria core ver.2.0.1219