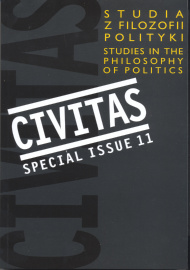 Summary/Abstract: What is the political meaning of justice combined with aletheia, that is, the truth understood as revealing, disclosing, and unconcealment ? On the basis of an immanent analysis of certain excerpts from Plato’s work we could find the answer. First of all, in Plato the question of justice is not a technical issue, a question of good or bad ruling over the polis, a good or bad law. It concerns matters of much greater significance: existential issues. That is why justice is more important than wealth, both to a man and to a political community. Only through other people, in a political community, is man capable of acquiring an identity, a unity between what he is by nature and what he becomes through education, during the process of adapting to a community to which he belongs. If we succeed in creating such a structure (system) of a political community in which people recognize their proper place and can identify with it, then they will be able to identify with the whole political community. Only a political community thus united can be true, that is, just. Internal unity, which is an expression of justice, is the source of a political community’s power, it is the basis for coexistence and cooperation. When there is no justice, bonds among people die out. Through injustice they become above all incapable of cooperating.

Obywatel a globalizacja The citizen and globalisation 2007 Komu potrzebna jest dzisiaj fi lozofi a polityki? Who needs the philosophy of politics today? 2011 O rewolucji raz jeszcze... On revolution once again 2013 Kultura polityczna: czy tego można się nauczyć? Political Culture. Is It Something We Can Learn? 2016 Secret organisations and their overt politics Secret organisations and their overt politics 2017
2023 © CEEOL. ALL Rights Reserved. Privacy Policy | Terms & Conditions of use
ICB - InterConsult Bulgaria core ver.2.0.1219