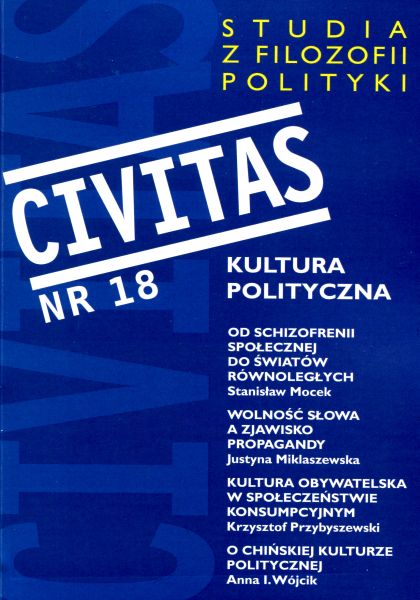 Kultura polityczna: czy tego można się nauczyć?
Political Culture. Is It Something We Can Learn?

Summary/Abstract: In this paper, the concept of political culture is considered in reference to the notions of G.A. Almond, S. Verba and J. Rawls. It is defined as a specific educational project, which is linked to the idea of a fair, democratic and constitutional system. The author also points to potential contemporary obstacles to implementation of this project. Deepening inequalities arising from personal culture are the first threat to liberal civic education. The second threat is associated with the development of new media and the related changes in the public sphere, including various forms of political and civic activity.

Obywatel a globalizacja The citizen and globalisation 2007 Justice as Aletheia Justice as Aletheia 2009 Komu potrzebna jest dzisiaj fi lozofi a polityki? Who needs the philosophy of politics today? 2011 O rewolucji raz jeszcze... On revolution once again 2013 Secret organisations and their overt politics Secret organisations and their overt politics 2017
2023 © CEEOL. ALL Rights Reserved. Privacy Policy | Terms & Conditions of use
ICB - InterConsult Bulgaria core ver.2.0.1219