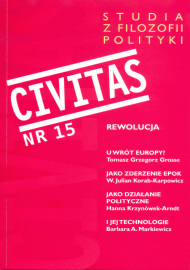 Summary/Abstract: As a starting point for considerations the author accepts that the concept of revolution has changed historically in a similar way as the concept of democracy. Initially democracy was limited to a certain reality and political system, but over time the concept has become synonymous with common good. It can be claimed that similar changes in meaning can be observed in the concept of revolution. However, as the trouble with its use in the media shows, the universal dimension of the concept of revolution does not apply to axiological and ideological layers. Therefore, it should be sought for elsewhere. The author suggests focusing on the technical side of the revolution rather than political ideas and values, as every revolution makes use of a specific technique for taking over power and establishing its own new form.

Obywatel a globalizacja The citizen and globalisation 2007 Justice as Aletheia Justice as Aletheia 2009 Komu potrzebna jest dzisiaj fi lozofi a polityki? Who needs the philosophy of politics today? 2011 Kultura polityczna: czy tego można się nauczyć? Political Culture. Is It Something We Can Learn? 2016 Secret organisations and their overt politics Secret organisations and their overt politics 2017
2023 © CEEOL. ALL Rights Reserved. Privacy Policy | Terms & Conditions of use
ICB - InterConsult Bulgaria core ver.2.0.1219