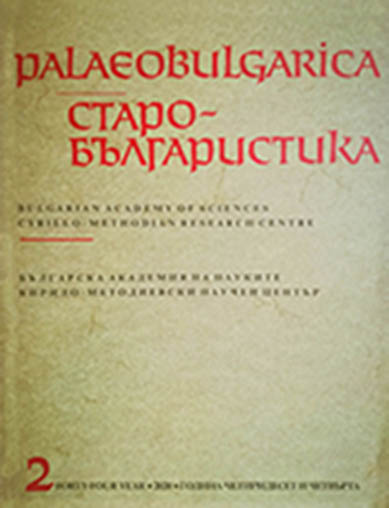 Summary/Abstract: The study discusses the common services. The latter are not designed for the fixed feast on determined date in the church calendar and are not related to particular saint/saints. They were in use when no specific hymnography was written for the day. In this sense they came up to meet practical needs, especially for smaller churches, which did not have all the liturgical books they needed. In the earlier period the common services were used a lot because the services for saints were few. According to the object of celebration these services differ in content and purpose. There are services for the Lord, for saints and other – drought, flood, disease, fires, etc. In the focus are the services for saints. They are presented according to some early Syriac, Georgian and Greek manuscripts. The comparison between them leads to the conclusion that the memories for Prophets, Apostles, Martyrs, Deceased, Reverends and Saints are common for all the manuscripts studied. Five memories are included in the Vienna manuscript Cod. Slav. 37 – for Prophets, Apostles, Reverends, Martyrs and Women Martyrs. Four of them (without the memory for Apostles) have found a stable place in the combine kanons for Saturday Morning in manuscripts in Greek. Their collection for this day must have happened in the ninth century when both the memories for the weekly services were determined and fixed and the weekly Oktoechos was compiled. It should have happened at the time of Joseph the Hymnographer who the most of the Saturday memories are ascribed to. The Vienna manuscript apparently has retained an old practice when the common services were included after the eight mode successions. Such inclusion could be considered as a reminiscence of the old universal hymnographic book of Tropologion in which the common services are included in the same way – after the eight mode successions. Further studies will show whether the Cod. Slav. 37 is one of the last manuscripts of the type of the Oktoechos to include a cycle of common services designated as such.