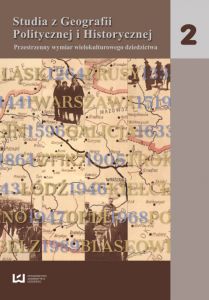 Summary/Abstract: Mniejszości narodowe (głównie żydowska i niemiecka), tożsame na ogół z mniejszościowymi wspólnotami religijnymi, wniosły wymierny wkład w rozwój zarówno gospodarczy, jak i społeczno-kulturalny Pabianic. Głównym celem artykułu jest określenie charakteru i form organizowania w przestrzeni miejskiej aktywności społeczno-kulturalnej przez wymienione grupy. National minorities, i.e. Jewish and German, constituting distinct (almost completely – as the followers of Judaism, or largely – as Evangelical Christians) religious groups, had considerable influence not only on the development of Pabianice's economic life, but also on the shaping of the social and cultural space of the city. Initiatives taken by their representatives were directed, on the one hand (and predominantly), to their own national or religious communities, which was mostly characteristic for the Jewish and, to a lesser extent, German minorities and, on the other, to a wider group of residents, which mostly applied to the Evangelicals. The dominant contribution to the development of socio-cultural sphere of the city, especially philanthropy, was made by religious communities. Providing assistance to the poor and needy was regarded a religious duty. The positive public perception was also meant to increase the number of followers in the Evangelical Church. The creators of the social and cultural life of the city also included entrepreneurs belonging to those communities. They contributed to the formation of numerous social (charity organisations, sports clubs) and cultural (musical societies) initiatives not only due to their accumulated wealth, but also due to the need to help others, take on different challenges and keep up the positively perceived image of a benefactor. They included almost all residents of the city interested in such forms of activity or support. The socio-cultural activities of minority communities have left their mark on the city, giving it a form of organisation. It became apparent primarily in the development of different parts of the space by each of the most active communities (Germans and Jews). The German minority, responsible for the creation and development of Pabianice industry, located their social and cultural institutions in the so-called New Town. This part of Pabianice was inhabited and developed “industrial” immigrants, many of whom were of German origin. As a minority not participating in the development of local industry to such an extent, Jews were socially and culturally active in the part of Pabianice known as New Town, especially in the initial phase. It was an area of concentration of both the first Jewish settlers and the later ones, that came during the economic prosperity.