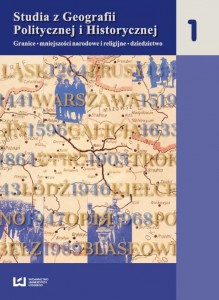 Summary/Abstract: W artykule dokonano uzasadnienia tytułowego powiązania geografii politycznej i historycznej.W tym celu przeprowadzono analizę relacji między obiema dyscyplinami, podejmującą kwestie ich genezy, kierunków rozwojowych, treści, zakresu i miejsca w systemie nauk, a także ustanowienia ram organizacyjnych dla rozwoju tych dyscyplin w łódzkim ośrodku geograficznym. As some has attempted to prove, both “titular” disciplines have different origins. They differ in their development trends and, thus, in the contents, scope and place in the system of sciences. However, different paths of development do not preclude them from tackling the same issues, especially considering that historical geography and political geography both refer, the former in a literal sense, to the unique bond between history and geography. Specific topics, that may seem familiar to both disciplines today, were discussed as far back as the 18th century, when political geography was still defining its identity and attempting to become a valid subject of geography. However, in the case of this discipline, its interests shared with its historical counterpart (concerning such issues as heraldry and toponymy) were mostly incidental and marginal. On the other hand, the issue of territorial divisions (nations, regions, borders), described by historians (or historical geographers) as “historical and political landscapes”, was discussed by both geographies since the very beginning. The main difference between the two – geo-political and geo-historical – approaches was the temporal perspective they assumed. While the present was most important for political geography, historical geography was more concerned with “former territorial divisions” (thus the term “historical and political landscapes” is apt). Each of the disciplines also treated the research subject differently. Political geography considered “the area described by borders and characterised by some organisation, i.e. above all a state” or region as central, while historical geography acknowledged its importance as one of many elements, apart from the transformed (cultural) environment, settlement, elementary disasters, formed communication network, the history of geographical horizons, toponymy and historical cartography, while referring it, as mentioned earlier, the reconstructed image of the past. The practice of reaching into the past to interpret contemporary phenomena and political systems caused the historical context to become an immanent element of political geography. The discipline was becoming more and more bold in interpreting the political map and the territorial characteristics of political formation and development of states and regions, not only in the presence, but also in the future. This research field saw the formation – in reference to the bond between history and geography – of a unique relationship between historical geography and political geography.