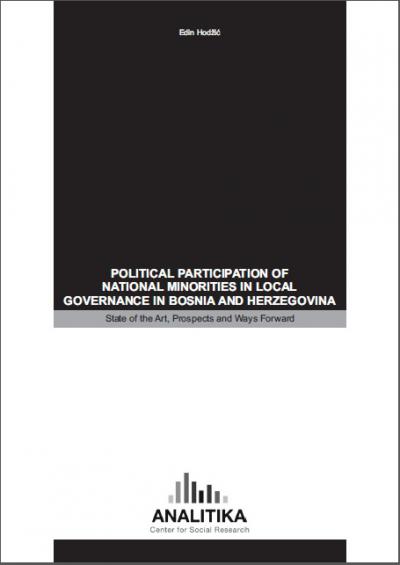 Author(s): Edin Hodžić
Subject(s): Politics, Constitutional Law, Governance, Government/Political systems, Ethnic Minorities Studies
Published by: Analitika – Centar za društvena istraživanja, sva prava pridržana
Keywords: BiH; political participation; minorities; Constitution; representation of minorities;
Summary/Abstract: The issue of participation of members of national minorities, as part of the constitutional category of “Others”, in the political and public life of Bosnia and Herzegovina (BiH) has been a recurring topic of concern of international organizations and institutions. As these international actors eloquently show, ethnic power-sharing arrangements related to the elaborate mechanisms of collective political equality of the three dominant ethnic groups in the state (Serbs, Croats and Bosniaks - constitutionally termed as constituent peoples) have been one of the main obstacles to equal participation of members of national minorities and other persons not belonging to constituent peoples in public affairs. Discrimination and exclusion of the heterogeneous constitutional category of “Others” in BiH, including persons belonging to national minorities, indeed takes place in a variety of institutions and settings. The most cited example of exclusion of minority ethno-cultural groups from public affairs is the ethnically exclusivist Constitution of BiH, which prevents, inter alia, persons belonging to minorities from being elected to the three-member Bosnian Presidency and delegated to the upper chamber of the Bosnian Parliament. However, these explicit, constitutionally entrenched mechanisms of exclusion seem to have completely obscured the more complex and subtle ones operating at the level of laws and policies related to decision-making processes at the local, municipal level. While such exclusion of “Others” is a matter of discrimination, the exclusion from political life of one category from this heterogeneous group – national minorities – is a violation of another important right – the right of persons belonging to minorities to participate in public affairs, in accordance with the more recent international minority rights instruments. Namely, during the last decade of the past century, new international group and minority rights instruments have been devised, recognizing and affirming the identity and status of minorities in national constitutional and political systems. A particularly important, even ground-breaking feature of these new international legal developments is the explicit recognition of the right of minorities to participate in public affairs. This new standard of political participation of minorities is formulated as them having a say in public “matters affecting them”. Based on these new standards, regional human rights institutions - most notably, the Advisory Committee (hereinafter AC) on the Framework Convention for the Protection of National Minorities (hereinafter FCNM) have interpreted the minority right to collective political participation as a rather “strong” right and started implementing it in unqualified terms, translating the minority cultural identity directly into the political plane. This is somewhat surprising, as even the more optimistic experts have initially been skeptical of the potential and reach of the FCNM, not least because its status as a framework convention. However, as some influential commentators have argued, the AC on the FCNM has proven to be very successful in ensuring collective political participation of minorities in accordance with the relevant provisions of this instrument. State reports and the opinions of the AC issued under FCNM, as well as various other policy documents of European institutions, suggest that the concept of political participation of minorities already has deep roots in the pan-European polity. Effective participation of minorities in public affairs is a broad concept. First, it can be interpreted as participation in a narrow sense: having representatives in elected bodies at different levels of governance, in the executive, or in advisory bodies, committees or public councils. Participation can also mean membership in “semi-state bodies, such as chambers of commerce and industry, in bodies representing agriculture and labor, in social insurance bodies, in trade unions, employers’ unions and tripartite bodies, and in boards of public broadcasting companies.” Additionally, participation in public affairs can include various forms of autonomy, ranging from territorial and federal arrangements to cultural autonomy. The practice of the AC on the FCNM, however, has shown that the focus is mostly placed on representation of minorities in elected bodies and on various forms of consultation, whereas mechanisms of participation in the executive, public administration, judicial and other bodies are almost neglected. In its last Opinion on BiH, the AC on the FCNM has confirmed that this dual avenue of representation and consultation of minorities at different levels of governance has not been adequately entrenched in the political system and practice of BiH. This research project examines precisely how this important emerging right plays out in the complex legal system of BiH and the equally complex decision-making practice in the country, focusing on the local level of governance. In other words, this study examines mechanisms of inclusion and exclusion of minorities in decision-making processes at the level of municipal governance. It is important to note that even persons belonging to constituent peoples can also in certain (sub-national) contexts be in minority situations and as such be considered minorities for the purpose of international minority rights instruments. However, according to the BiH Law on the Protection of Rights of Persons Belonging to National Minorities, a minority is defined as “part of the population-citizens of BiH who do not belong to any of the three constituent peoples, and is composed of persons of the same or similar ethnic origin, the same or similar tradition, custom, belief, language, culture and spirituality, and closely related history and other traits.” This research project focuses on national minorities in the latter sense only. The structure of the study is as follows: first, the conceptual and international legal framework is briefly elaborated. Following these introductory considerations, we examine both the legal framework and the practice of participation of persons belonging to minorities in decision-making at the local level in BiH. Although political representation and consultation mechanisms are treated separately, and in different chapters of the study, we are aware of the interconnections between the two mechanisms, which figurate prominently throughout the study.