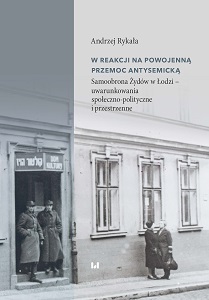 Author(s): Andrzej Rykała
Subject(s): Jewish studies, Geography, Regional studies, Human Geography, Historical Geography, History of Antisemitism
Published by: Wydawnictwo Uniwersytetu Łódzkiego
Keywords: Jews; Poland; Łódź; post-war period; anti-Semitic violence; pogroms; Jewish communities; national and cultural autonomy
Summary/Abstract: Jewish self-defense (Special Commission), like other forms of community life of Polish Jews, was a kind of sensation in Poland after World War II. It was created as a result of a wave of murders in the country, “anti-Jewish provocations, assaults on trains and the killing of Jewish passengers and, finally, the culmination of anti-Jewish activity of armed bands”, which was the Kielce pogrom of July 4, 1946. Actually, the Commission operated for a very short time, only until the end of May 1947. In total, 200 guard groups were formed consisting of 2,500 armed people (with approximately 1,000 rifles, 100 automatic weapons, over 1,000 pistols and 120 grenades), providing a round-the-clock protection of close to 390 objects of the following Jewish institutions: committees, child care homes, nursing homes, repatriate homes, schools, canteens, cooperatives, factories employing a larger number of Jews, Jewish parties, kibbutzim. The establishment of special commissions fulfilled its purpose – about 2,000 interventions, at various levels of government, were carried out throughout Poland, as a result of which attacks or provocations were thwarted and the danger was averted. Apart from performing the primary function of self-defense, the commission’s activity had a significant psychological impact. The presence of guards armed with rifles and automatic weapons in the vicinity of Jewish institutions eased somewhat the “prevailing moods of panic” among Jews that had been caused by the Kielce pogrom. It also had a deterrent effect on potential attackers, or neutralized the willingness to show hostile attitudes towards those who identified themselves as Jewish. The commissions also helped to manage the need, which many Jews had had since the beginning of the war, to stand up for the nation undergoing systematic extermination.