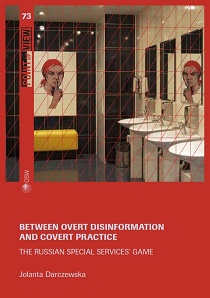 Author(s): Jolanta Darczewska
Subject(s): Politics / Political Sciences, Politics, Social Sciences, Media studies, Political Theory, Communication studies, Government/Political systems, Security and defense, Politics and communication
Published by: Ośrodek Studiów Wschodnich im. Marka Karpia
Keywords: Secret services; intelligence agency; special services; media; Russia’s information warfare; leaks of compromising information;
Summary/Abstract: It is generally believed that one sign that the secret services are doing their job well is that the media says nothing about them. In this respect, Russia is a special case: the services receive an excess of media coverage. This is only partly due to the media’s natural interest in an attractive subject, as well as the services’ own selfpromotion (although that is increasingly true around the world). In fact, it is a symptom of Russia’s information warfare, in which the special services’ public image is just one block in building the appearance of a strong state and a strong government. It also justifies and legitimises the high position which the services and elite members of the institutions of force enjoy in the Russian Federation’s political system. However, this artificial, mythologised image of the services conflicts with their non-public practices. These are revealed when their cover is blown, when journalists investigate criminal scandals involving the services, when controlled and uncontrolled leaks of compromising information take place, and when the opposition publicises cases where the special services violate fundamental rights and civil liberties – something they often do under the pretext of fighting the ‘fifth column’ of the West, international terrorists and foreign spies. This produces two different images of the services: the official one and the common one. The former presents the services as professional, patriotic and a stronghold of traditional values, Russia’s ‘sword and shield’; the latter shows them as pampered by the regime, lawless, corrupt and undisciplined, involved in brutal competition with one another, bureaucratised and criminalised.