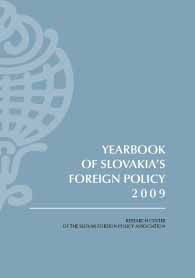 Slovakia and the European Union in the Year of Institutional Changes

The North Atlantic Alliance and Slovakia in 2009

The Corfu Process – an Opportunity to Establish a New Security Arrangement in Europe or just Another Stalemate?

Climate Changes and Climate Variability in the World and in Slovakia. Prior to, In and After 2009

Discontinuation of Russian Natural Gas Supplies through Ukraine to the EU in January 2009: An Ancient Drama or Just a Marginal Episode in the Natural Gas Market?

Visegrad and its ‘Soft Power’: the V4 Developments of 2009 Reviewed and Priorities of the Upcoming Period Outlined

Slovakia and the Eastern Partnership

Development Cooperation and Slovakia in 2009

A Chronology of the Important Events in Foreign Policy in 2009

Treaties, Agreements and Conventions published in 2009

List of the Embassies of the EU, NATO Countries and Some Other Countries

List of the Embassies of the Slovak Republic, Permanent Missions, Consulates General and Slovak Institutes Abroad