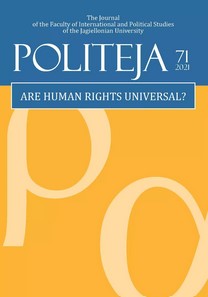 Summary/Abstract: The state, under the Westphalian order, was both the creator and product of international law which determined its position as the central actor of this system. The norms of international law defined the normative content of the internal security regime, where state security was identical with security as such in international relations. The reality that laid the foundation for this logical syllogism has been subject to gradual transformation that had its climax in the early decades of the 21st century. The states, previously holding monopoly of using force in international relations, which allowed for prevention of wars by means of intergovernmental agreements or maintenance of peace through institutionalized intergovernmental cooperation, lost their exclusive authority to use force. Stipulating ‘non-war’ by means of an (intergovernmental) international treaty became impossible since the non-state actors who apply force pursue counter-systemic goals and reject the international (and internal) order based on the rule of law. The state sovereignty, whose significant albeit not exclusive referent was autocracy and total power, has been transformed from the title of claim to cease the violation by the state into the personal right to protection (vested in an individual or minority/people/mankind in general).