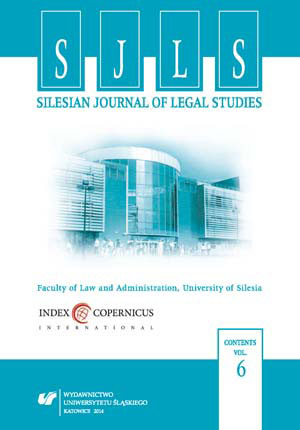 Summary/Abstract: The analysis is focused on legal issues concerning disputes over the Polish Citizenship Act (of 2009). The new regulation was necessary in the situation of political changes in Poland, including the implementation of standards constituting the state of law, i.e. fundamental rights and freedoms and adjusting Polish law to international and European standards. The Citizenship Act entering into force will bring Poland to the ratification of the Council of Europe Convention on nationality (already signed by Poland). The undertakings will end the long, difficult and controversial process of potential redefining the notion of citizenship, understanding such fundamental concepts as the nation and the state. Legislative work has taken place in an atmosphere of sharp political disputes regarding the foundations of the legislation and the adopted Act has been the subject of constitutional complaint. The Presidential complaint, the Constitutional Tribunal instance, the sentence and separate opinions of judges revealed all the differences of perceiving the democratic state of law, fundamental rights and freedoms of the human being as well as the citizenship polarizing Polish society since 1989. The legal dispute has been comparatively thoroughly analysed by Polish and international and European law systems. Citizenship issues have been considered not only at the intersection of various legal systems (international, domestic and European) but also eighty years of international codification.