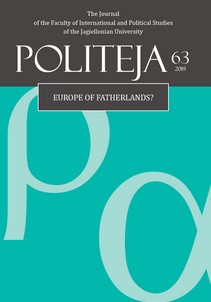 Summary/Abstract: This paper aims at analysing attitudes towards globalization processes and the European Union among five German political groups commonly categorized as extreme or radical right. It tries to answer research questions focusing on the role of anti-globalist and anti-European attitudes in the wider radical right ideology. The presented research follows Michael Freeden’s morphological approach to studying ideologies, with an attempt at finding the precise location of anti-globalist attitudes in the ideological structure of the political thought of the radical right. The author concludes that neither an anti-globalism nor an anti-European stance belong to the core of this ideology, but they rather play a secondary role.