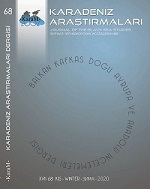 HAZAR'I AŞAN BİR HAZAR GÜCÜ: GEÇMİŞTEN GÜNÜMÜZE RUS HAZAR FİLOSU
A CASPIAN POWER BEYOND THE CASPIAN: THE CASPIAN FLOTILLA FROM THE PAST TO THE PRESENT

Summary/Abstract: Thanks to its rich energy sources, geopolitical position and importance in terms of energy transfer; Caspian Sea attracts the attention of not only regional but also non-Caspian states and increasingly forms a basis for a military contention. The contention, which circles around sharing of regional resources and the legal status of the Caspian Sea, brings the Caspian Flotilla, a Russian naval force which has been stationed in the Caspian Sea since the reign of Peter I, into the forefront. The power struggle that erupted in the region following the demise of the Soviet Union brought about Russia’s incentive for the enhancement of her naval force in the Caspian Sea. The Russian administration increased the number of navy ships in her Caspian Fleet and equipped them with advanced missile systems. Russia has also conducted large-scale exercises in the region especially since the presidency of Putin. The Caspian Flotilla constitutes the largest and well-established maritime power in the region in comparison with the naval capacities of other Caspian littoral states. The fleet exploited the opportunity of demonstrating its capability in areas outside the Caspian region with missile attacks at targets in Syria in October 2015. The aim of this study is to determine the effectiveness of the fleet in easing or triggering Russian intra-Caspian and global security concerns since the time of its inception. Additionally, the reactions of intra and extraregional states against Russian plans about the Caspian Flotilla will be analyzed. With the help of this analysis, “Is Caspian Flotilla the key of security or insecurity?” question will also be answered.