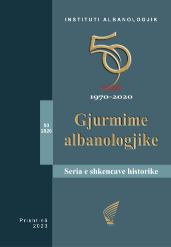 Summary/Abstract: All things considered then, we may conclude that the status of kasaba (town) has been assigned to those non-urban settlements, which would include a mosque with a mektep (school), a hamam with continuous water supply and sewerage system, a bazaar with numerous shops, an inn and relating buildings, as well as a zaviye or tekke (Dervishes’ lodge). Indeed, based on relevant Ottoman sources, such as the foundations’ statements (vakıfname), edifice’s epigraphs, but also other secondary sources, it is difficult to escape the conclusion that in Albanian inhabited areas, the kasabas have appeared in the second half of the XV century, initially in Korça (1495), then Zinova (1538), Kavaja (1561), Rogova (1580), Kaçanik (1594), Gjakova (1595), Gostivar (1601), Tirana (1614), Roshnik (mid-seventeenth century), Peqin (1666), Gjilan (mid -eighteenth century), etc. All the founders of the kasabas in the ethnic Albanian lands were Albanians with key positions in the Ottoman state administration, who, more or less, had gained abundant wealth. Driven by patriotic and religious motives, they had invested most of their wealth in their homeland, for charitable purposes, and in compliance with the vakıf system. It should also be noted that during the XV-XVIII centuries, the places where the kasabas were established were property of ethnic Albanian population. Whereas it is commonly argued that this population has been heterogeneous in terms of religious affiliation or, more precisely, in terms of affiliation to religious rites, i.e. Catholic or Orthodox, which is also confirmed by written sources of different origins, on the other hand this cannot be taken as an argument for the tendentious and completely unsubstantiated hypotheses, according to which the Slavic or Greek Orthodox homonyms and patronymics of the population of the villages where the above-mentioned kasabas were established, showed that these villages had a mixed ethnic Albanian-Slavic, or Albanian-Greek population. The Albanian kasabas of the XV-XVIII centuries were developed according to the principles of oriental Islamic urban planning, whereby the mosque was the central edifice. The other infrastructural and supra structural objects mentioned above were erected about it. New kasabas in the Albanian lands have sprouted in those places where there were conditions for their development, such as the possibilities for easy movement of commercial caravans, possibilities to be protected, of running water, either for drinking or for the obligatory cleaning with a view to carry out the other religious duties of the Muslim population, but also as a vital factor of urbanism.