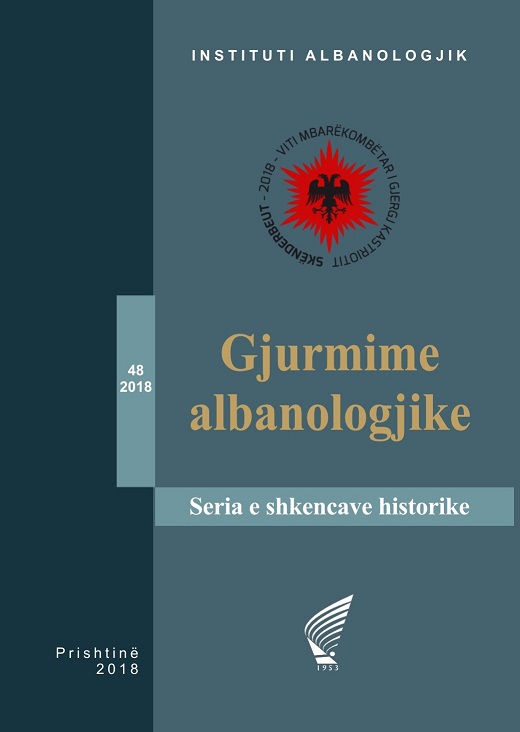 Summary/Abstract: The military defection of the Ottoman Empire at the gates of the walls of Vienna on 12 September 1683 marks an historic event. This defeat marks a turning point and profound change in relations between the Ottoman Empire and Europe. The long and dramatic wars between the Ottoman Empire and its European neighbors at the turn of the seventeenth century and the first four decades of the 18th century caused a stir and a series of changes, both within the Ottoman state and society. Of particular importance to the historical development of Albanian nation and the ethnic Albanian territories of the Ottoman Empire in general and of today's Kosovo in particular, are the changes in the political system and the Ottoman economic system of the beginning of the eighteenth century. With changes in the political system, especially with the recognition of inherent power in the Albanian sanctuaries, Ottoman power is not only decentralized, but conditions have been created for the consolidation of Albanian oxhak and the formation of the Albanian political elite. Meanwhile, with the changes in the Ottoman social economic system, namely in the legal agrarian system, finally dominated the system of chiflik-sahibinj, on the timar system - spahij, which created the conditions for the establishment of the Albanian aristocracy and the creation of the Albanian political elite. The territories covered by the wars between the forces of the "Holy Alliance" and those of the Ottomans Empire, in particular the areas of today's Kosovo and other ethnic Albanian areas of Sandzak and today's Macedonia, have experienced the worst and deeper consequences of these wars. The sources we have consulted bring new light to the developments of these wars, the role of Albanians in these wars as well as the political, economic and social circumstances of the Albanian majority population in these areas. These sources shed new light on the extremely serious consequences of these wars for the Albanian people and for the material and cultural goods in today's Kosovo. They put new light especially for the demographic movements and the displacement of the Albanian population from today's Kosovo. The data that comes from these sources are clear evidence of the enormous depopulation of Albanian majority in today's Kosovo. This depopulation came as a result of murder and death from starvation, disease, and the two-thirds (⅔) plague epidemic of the Albanian population of Kosovo today. These data ultimately reject the hypocrisy of Serbian historiography on the so-called "Great Serbian Migration of Kosovo". Ottoman sources prove that the Serb population during the Ottoman centuries in Kosovo has been a minority and has not had any significant role in the country's historical development, especially from the late 15th to the late 19th century.