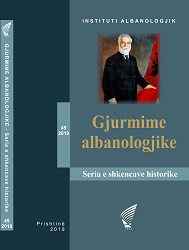 Summary/Abstract: In conclusion, we may say that since the first half of the 18th century the Albanian lands had outright functional relations between the political power of the Albanian aristocracy and the representatives of high culture, respectively with the representatives of Albanian written culture. Political rulers of Albanian small and large sandjaks and pashas, were not only patrons of the originators of high Albanian culture, but besides, many of them were initiators of this culture. We find such cases in the noble Albanian families of Vlora, Libohova, Vërlaci, Biçaku, Bushati, Mahmutbegolli, etc. Albanian poets and writers of this period triggered the awakening of the national consciousness. A substantial part of them were also employees of formal and non-formal education in the centres of Albanian sandjaks. The fact that the vast majority of educational institutions of these sandjaks were founded by members of the Albanian political elite and funded by their foundations, shows even more undoubtedly the relationship of this class with the initiators of the high culture. The close relationship the enlightened Albanian political elite had with the creators of high culture has certainly helped to prepare the ground for Albanian nationalism. Ottoman state centralization meant not only military administrative centralization, but beyond that, it was the manifestation of a worldview of emerging Turkish nationalism. The tendencies of this Turkish nationalist view of Ottoman administration at the time of Tanzimat, are clearly noticed in its efforts to eliminate the Albanian-Ottoman cultural differences. To achieve this, they attacked the main factors of Albanian national and cultural development, namely: - Eliminated, almost entirely, the Albanian political, economic and cultural elite; - Attacked the Albanian language, as the basic element of Albanian culture and as the foremost determinant of the ethnic, national and cultural identity of Albania; - Attacked the Albanian customary law by making efforts to revise the Albanian Kanun, as well as to remove the autonomy of the tribes and the Bajrak system; - Removed the national dress of the military forces of the Albanian pashas, as a uniform of their cultural identification and as a form of cultural difference from the Turks. Consequently, the armed resistance of the broad masses of the Albanian people, led by the elite of the noble Albanian families, following the Assembly of Berat, respectively the 'Albanian League' of November 1828 and the meeting in Paschalic Council of Shkodra in January of 1831, relied on the political principles of Albanian nationalism in formation.