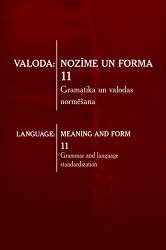 Summary/Abstract: Prefixation is a productive technique of verb derivation in Latvian. Prefixal verbs derived from the same basic verb are sometimes used as synonyms, but not always in the right sense. Prefixes are polysemous. The boundaries of their meanings are often unclear. Even native speakers frequently find it difficult to discern the nuances that distinguish several prefixal verbs. Sometimes a meaning of the verb is revealed only in a context. Context of prefixal verb is well visible in corpus data. The aim of the study is to identify how corpus examples help to distinguish between the nuances of the meanings of prefixal verbs derived from the same basic verb. The study analyses the corpus examples and compares the words before and after the prefixal verbs. There are two types of errors: use of a prefix inappropriate for a context and unnecessary use of a prefix. An in-depth look at the derivatives piezvanīt ‘to call by phone’, uzzvanīt ‘to ring up’, sazvanīt ‘to reach by phone’, pazvanīt ‘to ring a bell’ from the verb zvanīt ‘to call’; the derivatives apgulties ‘to lie down’, atgulties ‘to lie down’, nogulties ‘to lie down’ from the verb gulties ‘to lie down’; and the derivative nodefinēt ‘to define’ from the verb definēt ‘to define’ are presented. Corpus analysis platform “Sketch Engine” is employed to compare contextual use of prefixal verbs in corpus “lvTenTen: Corpus of the Latvian Web”. Examples are excerpted from corpora “The Balanced Corpus of Modern Latvian (LVK2018)”, “The Latvian Speech Corpus (LarKo)” and “Saeima” as well. The use of prefixal verbs by Latvian learners is analysed using texts from the Latvian language proficiency test for level C.