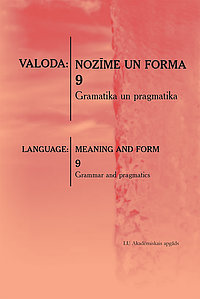 Summary/Abstract: Although the use of a syntactic method when deriving the new verbs in Latvian language is not a very productive way, the number of compound verbs is increasing. The first part of derivations consists of an adverb or a preposition atpakaļ ‘back’, caur ‘through’, garām ‘past’, klāt ‘close’, līdz ‘up to’, pakaļ ‘after’, pret ‘towards’, prom ‘away’, šurp ‘here’ and some others. The contemporary texts contain not only the participles but also the finite forms of such verbs. In translations of the legal texts from the English language there is a tendency to transfer all morphemes from a foreign verb in a single verb, for example, to follow up is translated as ‘līdzsekot’. It could be explained by the need not to lose any shade of the original meaning and to express oneself in a short manner. The influence of a foreign language in the verb derivation is not a new phenomenon. The Latvian dictionary published in the year 1927 contains verb compounds directly mimicking the syntactic structure of the German verb compounds. There is no consensus between Latvian linguists how to call this way of verb creation – the prefixation or the compound derivation; and how to call this first morpheme of a verb – the prefixoid, the half-prefix, the first part of compound. There are about 30 verbs with prefixoids included in the dictionary of the Latvian literary language published between the 1972 and 1996. In contemporary texts, in the balanced corpora and the different web sites, about 70 verbs with the prefixoids are detected. The most popular are derivations with the prefixoids caur- ‘through’ and līdz- ‘together’.