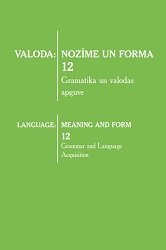 Summary/Abstract: Prefixation is a productive technique of verb derivation in Latvian. The range of meanings that prefix can assign to different verbs is very wide. Usually, the meanings of prefixes are of spatial, temporal, or quantitative nature. Traditionally in Latvian linguistics, the meanings of prefixes are presented in the form of a list, giving some examples of prefixed verbs. In this study, prefix meanings are reflected in the radial meaning model, which clearly shows the hierarchy of prefix meanings, common and different properties of meanings. Until now, the classification of the meanings of verbal prefixes in the Latvian linguistics has not been addressed in this way. The concept of radial category is widely used in cognitive linguistics (Lakoff 1987, 65). The radial meaning model for the prefix pār- was created by analysing 396 prefixed verbs excerpted from lvTenTen14, LVK2018 and the Saeima corpus. The model includes 13 meanings. Although the prototypical meaning of the prefix pār- is movement over some object, the largest group of the pār- prefixed verbs have the meaning of repeated action.