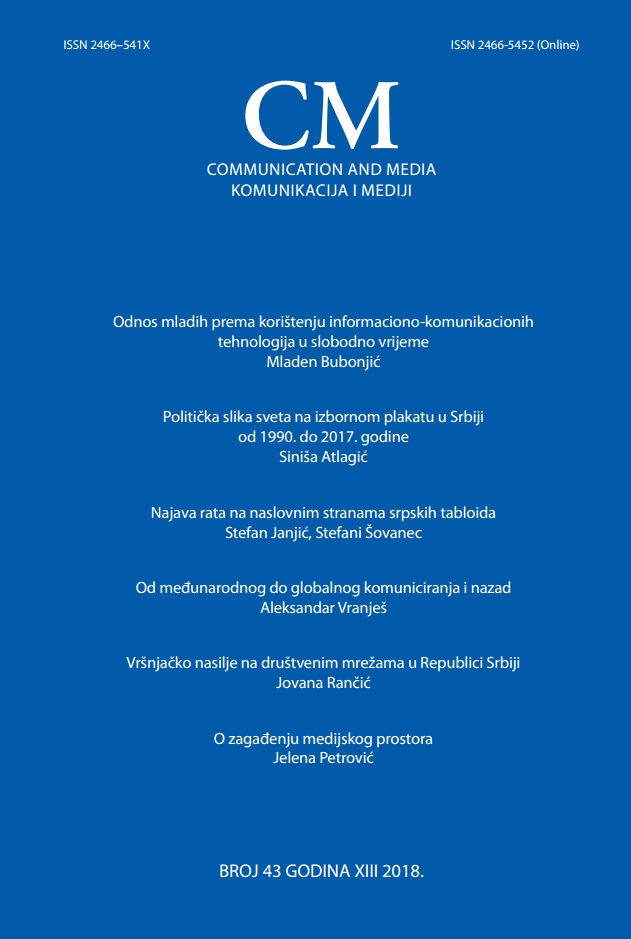 Summary/Abstract: Pro-war rhetoric has become almost everyday practice of contemporary tabloid press in Serbia, and such editorial policy finds a backbone in the unstable social and political conditions in the Western Balkans, in the turmoil on the world political scene, the rise of extremism, as well as in unrealized nationalistic and territorial pretensions from the former Yugoslavia. Media reporting on arming becomes extremely ecstatic, and it is often followed by chauvinistic discourse and claims without any factual references. The topic of this research are the implicit and explicit announcements of war on the front pages of the tabloids Informer and Srpski telegraf in a one-year period, from 1 April 2016 to 31 March 2017. The aim of this paper is to identify discourse patterns that tabloids Informer and Srpski telegraf use in these announcements of wars, which was achieved by the method of quantitativequalitative discourse analysis. Pro-war rhetoric is just one of the forms of unethical behavior of media outlets, but potentially the most dangerous, as evidenced by the Yugoslavian experience of the 1990s. Announcements of war with Croatia, Kosovo, Albania or Bosnia and Herzegovina, which have become the daily routine of the analyzed daily newspapers, violate the ethical principles of the journalistic profession, in the first place by introducing unjustified fear and fomenting discrimination and inter-ethnic intolerance.