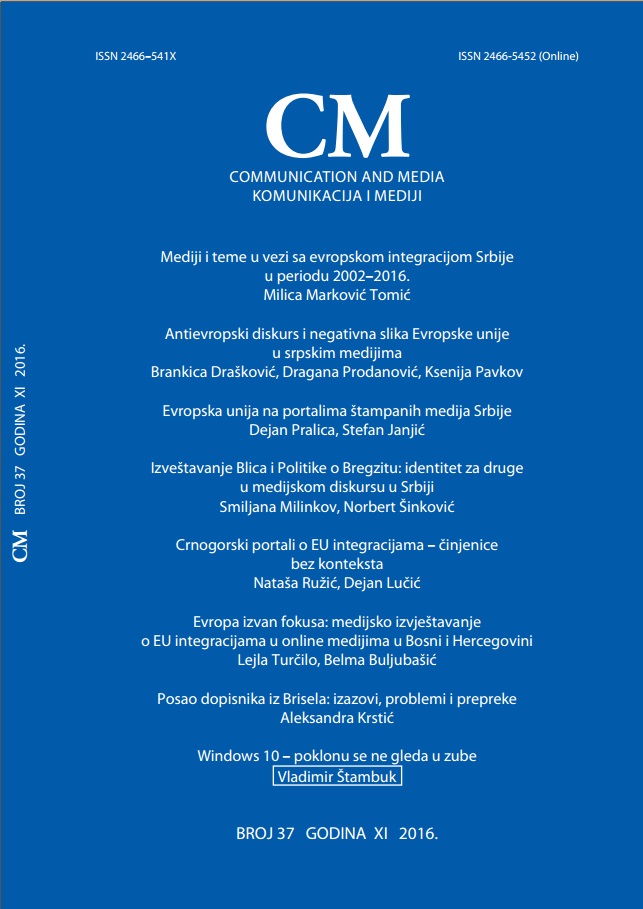 Summary/Abstract: The aim of this paper is to show how Serbian media report on the subjects connected to the European Union. The corpus consists of 243 selected texts from the websites of four daily newspapers – Politika, Danas, Blic and Informer, published from 13th to 19th June 2016. These four media were chosen because they cover different ideological positions and have different approaches to journalistic reporting. The method used in this paper is quantitative and qualitative analysis of media discourse. The unit of analysis was a media text. The analysis showed that the websites mostly reported factually about the EU (73%), without any detailed analysis of certain phenomena. Thus, the titles were dominantly informative. The research showed that these media mostly relied on news agencies’ information (61%), while the journalist who signed the article appeared in only one-third of the reports. The websites mainly reported about current media events and press conferences, whereas only a small portion of articles referred to certain European problems which required a more complex approach. The most frequent interlocutors were domestic and international politicians. In most texts journalists had an impartial attitude towards the topic. The results of the research showed that, with certain nuances, there were almost no differences in the reporting on the European Union among these four dailies, although their reporting on the domestic politics is significantly different. The European Union was not their main topic and the journalists did not explore it in great detail.