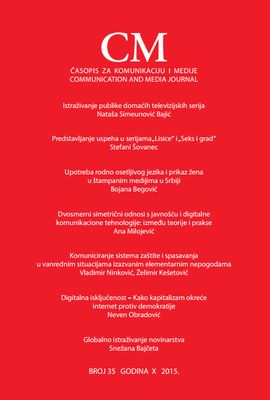 Summary/Abstract: This paper presents the analysis of the representation of success in the domestic television series “Lisice” and American series “Sex and the city”, with an aim to discover background ideology of the construction of success. Narrative analysis has included the story and development of characters through seasons, while some episodes, sequences or scenes are analysed in detail. The research has shown that television series „Sex and the city” and “Lisice” promote certain models of behaviour and lifestyles, and that those representations provide frames for understanding success and failure. “Sex and the city” provides more liberal concept of success, than domestic series, and the differences in presentation of success in domestic and American series are partly conditioned by different social and cultural values. Domestic TV series is Americanised as it imitates the concept American series and specifically the expressions of the main characters. Television series “Lisice”, although made following the American model, has its own local specificities, so women are offered a traditional version of success by becoming wives, mothers and housewives.