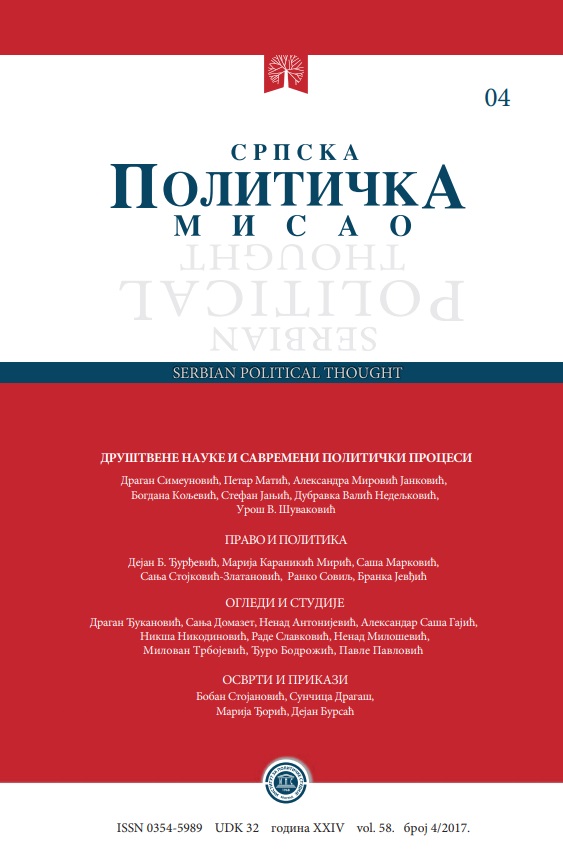 Summary/Abstract: The subject of this research is the discourse of central news programs of Radio-Television of Serbia (Dnevnik 2), RTV Pink (Nacionalni dnevnik) and TV N1 (Dnevnik) on the 2017 presidential election campaign. The aim of the paper is to deconstruct the reporting of these media about the activities of 11 presidential candidates, with a focus on (non)tolerance, (dis)balance, i.e. (un)equal media treatment of candidates. The survey shows that the candidate of the ruling parties used the position of prime minister to create a series of pseudo-events for his self-promotion, whereby the analyzed media did not have a sufficient distance to such a kind of marketing. The irregular predispositions also affected the final distribution of time within the central news programs, and the candidate of the ruling parties had far more space than any opposition candidate. The most extreme example is TV Pink, where Vucic had 99.44% of the share in total time. This campaign was specific for covert advertising, setting the timing of ceremonial events and important diplomatic visits in accordance with the needs of the authorities, and in the service of its self-promotion, but also for an extremely negative tone, racing in collecting support from public figures, and topics related to four anniversaries: the murder of Zoran Djindjic, the death of Slobodan Milosevic, the 2004 unrest in Kosovo, as well as the anniversary of the NATO bombing of Yugoslavia. In addition, the most important topics were foreign policy, Euro integration and the status of Kosovo. This year’s campaign was extremely negatively intonated and guided by an ad hominem principle. Candidates used hate speech in public discourse and bring out negative qualifications of the opponents. The campaign for the president of Serbia in 2017 had a reflection in a distorted media mirror.