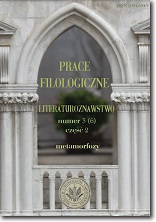 Summary/Abstract: In themid-nineteenth century a Czech writer and folklorist, Karel Jaromír Erben, publishes a collection under the title {Bouquet}, which consists of thirteen ballads inspired by oral folk literature. The leading theme of the collection is the metamorphosis of the dead into the living, which is derived from the primordial conceptions about monistic nature of all phenomena. Erben presents various options for reviving the dead: a metamorphosis into a vampire, a tree, a flower, a bird, and rebirth in a physical form before death. In each case, the metamorphosis involves the action of the elements of nature, which are a tool of moral instruction in the ballads. Reviving the dead is a consequence or a cause of sin, which is the exposure of human life in the name of selfish motives. Erben identifies selfishness with the betrayal of the family. From this point of view, the metamorphosis of the dead into the living reminds us of the value of human life, which is confirmed in family life conducted in accordance with Christian precepts. Erben allegorically extends this Biedermeier message, expressing faith in the rebirth of the Czech nation, which has been politically buried by the Habsburg regime.