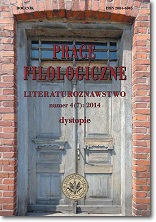 Summary/Abstract: Bram Stoker's {Dracula} is the most famous example of a successful symbiosis between gothicism and balkanism. With this symbiosis, Irish author refreshes and popularizes the vampire myth and enriches it with the myth of Transylvania as a homeland of vampirism. Stoker tries to make the image of Transylvania as authentic as possible, but at the same time, he mystifies some facts. He creates Transylvania in accordance with balkanistic stereotype as a beautiful, but backward land. European culture is mingled there with the oriental culture. Count Dracula’s vampirism is a horrible effect of this cultural hybridization. According to psychoanalytic interpretation, the castle of a vampire symbolizes the unconsciousness of Westerners, and the vampire is their double. Dracula embodies their repressed ideas related to the desire of absolute power which enables to satisfy the instincts freely. The balkanistic context of psychoanalytic interpretation of Dracula's castle allows the extension of this interpretation to the entire Transylvania, which in Stoker's novel is a metonymy of the Balkans and Eastern Europe. This region of Europe was in the 19th century regarded in the West as the boundary between Europe and Asia, and it serves as a {locus horridus}, that is to say, a bad place which is a reservoir of culturally forbidden desires that Westerners repress by attributing them to the Eastern European culture.