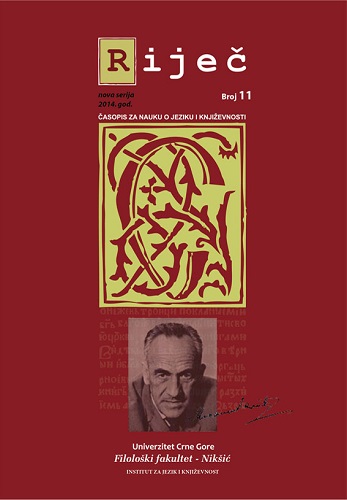 Summary/Abstract: This paper deals with a very interesting phenomenon found in the prose of Lalic - the use of the standard idiom in the phraseology of characters. Namely, it is known that for the purpose of speech characterization, the authors use linguistic variant of an immanent character, so that the phraseological aspect of a character becomes one of the fundamental procedures in the psychological motivation and characterization. In the prose of this author, the process of speech characterization differs depending on the creative period. The beginning and end of work of Lalic was significantly marked by the characterization of the speech of its characters, while such a procedure is absent in the most successful of his novels of trilogy, as well as in other prose works, written in the same period. In the novels of Mihailo Lalic, the characters, although sociocultural ones belong to a layer that inevitably uses a folk vocal expression, use the standard idiom in the narrative reality of the novels, which somewhat diminish their "plasticity" and originality. This article offers answers to the question of what caused the writer‘s different approach to speech characterization in three periods of his work: initial, central and final.