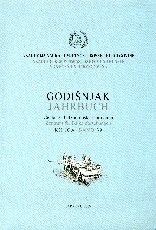 Summary/Abstract: In 2009 rescue archaeological excavations were made on the site of Grovnice in Mali Mošunj, Vitez municipality. During this campaign it has been excavated only one part of the large and unexplored necropolis: 9 graves and 3 tombs (the third one, accord- Maksimijana 305-311; Licinija 307-323 i Julijana II. 360- 363. Truhelka 1893, 690-691. 24 Osim numizmatičkih nalaza u prilog ovoj dataciji govori i kameni namješta iz crkve na Kalvariji koji po antičkim karakteristikama ne bi trebalo datirati kasnije od IV. st. Basler 1972, 158. ing to the lack of arguments, is not completely defined object), which were very destroyed by the mechanization of the local stone mine. Nevertheless, during the investigation, it was possible to reach a series of findings on which basis was possible to put this necropolis in a certain context and to define it chronologically. Even though some elements like fragments of the sepulchral monuments (stele) are pointing to existence of this necropolis in the period of the Early Antiquity; vault tombs, burials oriented W-E with heads on west and legs on east, with arms straight to the body and hands placed on pelvis, remains of the wooden coffins and traces of the linen that enfolded the deceased offered us more arguments to determine this necropolis in the period from 4th to 5th century, when the Late Antiquity not just in Mali Mošunj, but in the vast area showed very intensively.