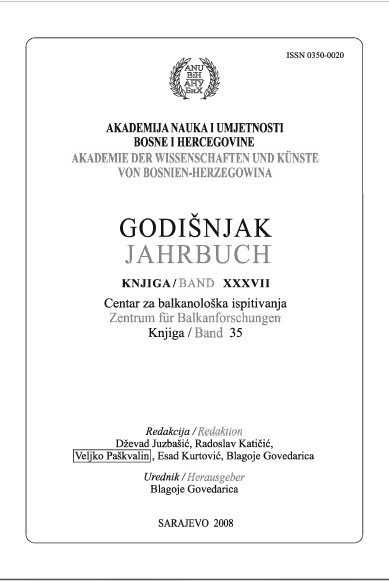 Summary/Abstract: Lake of Desilo is part of the „Hutovo Blato“ nature park, which is situated in the southern part of Bosnia and Herzegovina, precisely in Bajevci, municipality of Čapljina, about 10 km from the Metković-Mostar highway. This is a unique sub-Mediterranean marsh area located into specific Herzegovinian karst ambient. The site is named after the spring of Desilo, one of the numerous springs and lakes which become from the water of the subterranean river Trebisnjica, the largest subterranean river in this area. With a total area of 2 ha, and very significant depth which, on some points, even reaches 10m, Desilo is like a water hip, considerably pulled in between two hills, Pulica and Lopate. The area around the lake has been formed as a very specific archaeological landscape where an underwater archaeological site were registered, a hill-top settlement on the Lopata hill, and a necropolis which is presented in this article. So far, in the lake were discovered remains of two Illyrian ships with a cargo of amphorae of Lamboglia II type, Roman iron spears, dated in the 2nd and 1st century BC, as well as a double bladed bronze axe, and numerous fragments of ceramic from the bronze age from the underwater prehistoric layer, confirm the continuity of settlement in this area from prehistory until present times. The necropolis that we present here was discovered by accident, during construction works. The area of the prehistoric barrow (diameter 16m, and 2.5m high) was partly destroyed by the construction works and by the local road that was placed on it. Excavations discovered that the barrow was made by a combination of soil and chopped stones in the upper layers and small stones at the bottom