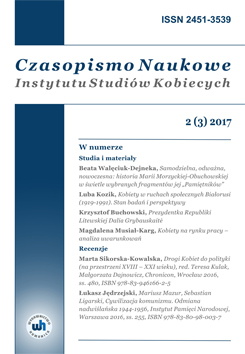 Summary/Abstract: Dalia Grybauskaitė was elected the president of Lithuania in 2009. Since then there has been used a female version of the noun ‘president’ – prezidentė. The president in Lithuania has limited constitutional rights. However, Grybauskaitė managed to take advantage of the opportunities to strengthen her position. Even though she derives from the communist party, she made political alliance with the Lithuanian right-wing parties. Her priority was to reduce Lithuanian dependence on the USA. Nevertheless, the development of the international situation after 2013 made Grybauskaitė change her plans. Since then she has been renown for her hostile speeches against Russia. During her presidential campaign in 2014 Grybauskaitė was accused of being KGB agent in the past. None-theless, despite the accusations Grybauskaitė won the election again.