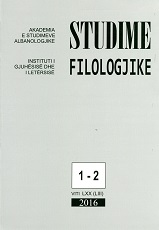 Summary/Abstract: In order to participate in the international debate on the issue of who are the Albanians, Zef Jubani published in 1871 Raccolta di Canti Popolari e Rapsodie di Poemi Albanesi. Being an Albanian of Albanian lands, unlike all who wrote about the Albanian issue and culture addressed to the European public, he had a great advantage: he knew well Albanian poets who had used different scripts in writing Albanian literature. So, in this work he offered a special approach. Through literature Albanians have created for almost two centuries, he wanted “to judge the nature and the character of Albanian people and the changes that have taken place at different stages since last centuries to this day.” In this context, he also provides a historical gallery of powerful Albanian people of mind. Through this gallery of famous people, he sought to help the spiritual and mental resurrection of Albanians, as well as raising national pride and creating national patterns. The second reason leading to the compilation of this anthology of Albanian poetry, being the first of its kind in Albanian literary historiography, has to do with the idea discussed at this time regarding “the beginnings of a national literature.” The development of national literature he sought to rely on two demands: encouragement and cultivation. Continuous cultivation and strong interest Zef Jubani sees as the main ways that would lead Albanian literature towards excellence, even though Albanian literature at that time was “at the stage of childhood” and was not internationally recognized. In this context is appreciated even the publishing of literary heritage. The literary past serves as a good motive for the present, because according to Zef Jubani, a people who have born powerful literary personalities like Pjetër Bogdani, Nezim Berati and Hysen Dobraçi, is capable of doing it once again.