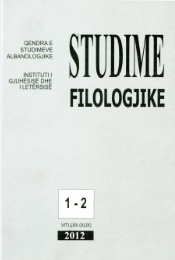 Summary/Abstract: In 1847, in Tepelena, an Muslim dervish called Dervish Sali Ashkiu achieved the textual edition of Albanian Divan, written by 18th century Albanian poet, Nezim Berati. Dervish Sali Ashkiu not only used the Albanian language of his time, but, with a great linguistic conscience, he also replaced some Turkish words with respective Albanian ones. As far as we know today, this Muslim cleric seems to be the first editor not only of Albanian literature texts written with Arabic alphabet, but even the pioneer of text edition in Albanian literature. This work made by Dervish Saliu had been its influence on other Albanian nationalists. Even, this editorial work had served to Sami Frasheri in his efforts to publish Albanian Divan ofNezim, in June 1882.