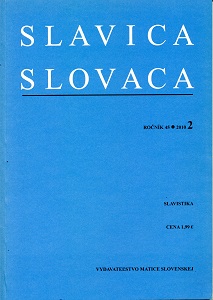 Summary/Abstract: The space of dynamic “political” and “cultural” Europe and the period of two centuries, having in mind the period between late 18th century and early 20th century, are a favourable background for the constitution and transformations of the term Slavdom, specification and differentiation of the thesis the idea of Slavdom as well as for a different “practice” of Slavic mutuality as complex and contradictory. At the same time, it refers to differentiated expressions of the phenomenon which was going on individually (nation) or collectively (Slavs, Slavdom, Slavic) within the set of identificational (ethnic, national, cultural, ideological, etc.) and emancipational (political, economical, supranational conceptual intentions, etc.) movements. As a matter of fact, they have their genesis in a cultural intention (programme, conception, idea) and result in a political “practice” of that age. A clear stress in it is not rare. Between the thesis and its realization even with the Slavic mutuality it is a priori necessary to take into consideration national or “time” differences.