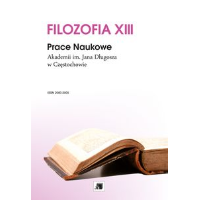 Alasdair MacIntyre jako krytyk oświeceniowego projektu uzasadnienia moralności (I): Przyczyny kryzysu etyki nowożytnej
Alasdair MacIntyre as a Critic of the Enlightenment Project of Justifying Morality (I): The Reasons of the Crisis of the Modern Ethics

Summary/Abstract: In the famous “disquieting suggestion” Alasdair MacIntyre has written identifying the hypothetical state of modern ethics as a set of mutually antagonistic, chaotic, irrational and ultimately arbitrary positions. The later work of this extremely popular contemporary Scottish (although for many decades living in the United States) philosopher, sometimes referred to “an interminably long history of ethics”, is devoted mainly two purposes: to prove the arguments put forward in the “disquieting suggestion” and to overcome this crisis. This series of two articles is devoted to the presentation of the first, negative aim of MacIntyre. The eponymous reasons for the crisis of a contemporary moral philosophy, MacIntyre summarizes the three slogans: incommensurability of terms and language, the conceptual incommensurability of rival arguments and the ostensible impersonal, objective rationality. These three elements are a characteristic of all modern ethical theories realising “the enlightenment project of justifying morality.” As an example MacIntyre has shown two post-Enlightenment ethical traditions: liberal individualism (negating the social dimension of the person and the communal base of practical rationality) and emotivism, which is based on the negation of rational discourse, leading to persuasion and propaganda in the moral sphere.