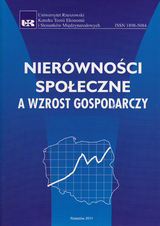 Summary/Abstract: The subject of the article is connected with tmigrations; quantithe phenomenon of migration. It is becoming moreand more popular. It influences the changes regarding employment and spatial arrangement. This phenomenontakes a special meaning in the areas characterized by a low level of social and economicdevelopment. These areas include macro-region - Eastern Poland (provinces: Subcarpathia, PodlasieProvince, Świętokrzyskie Province, Lublin Province and Warmia-Masuria Province). It is commonlynamed an eastern wall, or Poland B. As it is commonly known, this macro-region is a problematicone. One of the problems is the phenomenon of migration which is specially severe in this part of thecountry. What is worth emphasizing is the fact that the substantial part of migrating people are youngpeople. Taking the above into consideration, the analysis of this phenomenon seems to be absolutelynecessary and reasonable. The issues presented in the article allowed us to picture the situation regardinginterprovincial migration; within the provinces of Poland. The text has been divided into twoparts. In the first one, the research method applied has been described (flow net). In the second part,the results of the research have been presented. Considering the fact that migration is a complex phenomenonwhich is characterized by numerous aspects, the issues presented in the article concerningmigration processes in Eastern Poland, do not exhaust the matter entirely. The applied research approachallowed us to work out the answer to the question: What were the tendencies and directions ofpeople’s relocation in the area of Poland between 2009–2014. Conducting this research in the dynamicframe created the opportunity of identification, assessment and analysis of the existing regularities. Theresults can serve as the source of information about demographic and social changes and tendencieswhich took place in the area of Poland in the period concerned