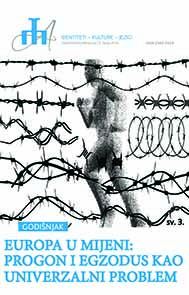 Summary/Abstract: If the Auschwitz, according to Lyotard, can be understood as a paradigmatic term for tragic incompleteness of the modern, then the Jungle can be understood as a farcical incompleteness of the postmodern. When the principle trauma of the Other became the concrete challenge of otherness the concept of the end of history as an idyllic aspect of systematic efficiency was radically challenged. Postmodern notion of historical completeness without content and without breach suddenly loses its credentials – on the surface uncontrollably breaks out either the asynchronous (Bloch) or the suppressed (Benjamin, Freud), but in every case something that was already present. What becomes problematic is the relation between the fabricated reality (what should happen) and the fabricating reality (what is actually happening). This paper is dedicated to the analysis of this issue – considering that it cannot be resolved by antagonisms or by relocation of the reality production, but only by approaching and understanding it – the relation of the problematic instances of the real will be analysed as a relation of the suppressed radical tendencies of the modern epoch and the permissive tendencies of the postmodern epoch. That way the actuality can be understood as a conflict between the subject and the infrastructure: on the one part there's the modern subject (immigrant, terrorist) who actualizes himself by nullifying himself, and on the other the postmodern infrastructure (airports, concert halls, bureaucratic corridors) which nullifies itself by actualizing itself.