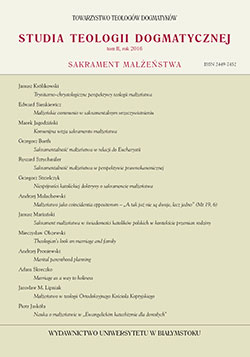 Summary/Abstract: The Synod of Bishops in 2014 showed how polarized are the positions in understanding and meaning of the sacramental marriage. In 2015 Holy Father Pope Francis issued new standards for testing the validity of marriages (mainly sacramental). Relevance and effectiveness of new solutions should be examined. The article focuses on the legal as well as legal and pastoral aspects of sacramentality of marriage. The standards were analysed related to the sacramentality at the stage of marriage and a declaration of non-existence or cessation of marriage. Considerations were divided into the following issues of concern: 1. Sacramentality of marriage in the teaching of the Church in the twentieth century. 2. Sacramentality of marriage in the CIC from 1983. (Esp. Can. 1055 § 1-2, 1056, 1065§ 2, 1099 1134) 3. Conclusion and cessation of non-sacramental marriages, 4. Conclusion and cessation of sacramental marriage. General conclusions and proposals for the future were described at the end. These analyses show that the sacramental nature of marriage of baptized stems from the New Testament. Dissolution of non-sacramental marriages is easier than sacramental. It is suggested that the dogmatists analyzed whether the unconditional call of a marriage contract and the sacrament is necessary. The new standards of Pope Francis require a process of their lawful use, reliability of employees in the ecclesiastical tribunals, as well as the great responsibility of the bishops and all the faithful. There is increasingly important need for a uniform discipline of the Church on marriage, including research and declared nullity. There should be increasing concern not only for people living in subsequent relationships, but also organizing special pastoral care of marriages, not just as families.