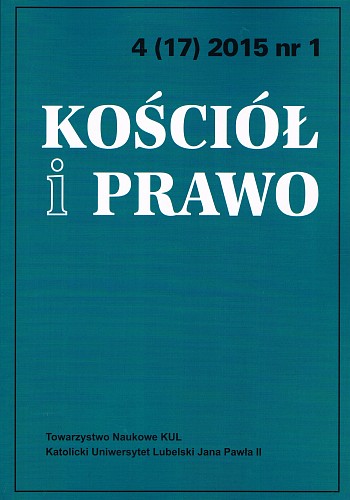 Summary/Abstract: The conscience clause enables settlement of the conflict between norms of conscience arising from precepts of the natural law and inherent dignity of the human being, and the demands arising from the norms of positive law, definitely in favor of moral precepts. In Europe and in the whole world, there are two tendencies: one seeks to maximize the extension of the freedom of killing people deemed unnecessary (including the human fetus), and the second option formulates more accurate provisions, which giving the possibility a real exercise of conscience clause. In this situation, announced an appeal of the Parliamentary Assembly of the Council of Europe from 2010, directed especially to European countries, for the creation of the legal conditions to a wider use of conscientious clause.The authorization to act in accordance with own conscience is formally guaranteed in norms of Polish law, to the employees associated with the protection of life and health. Ability to rely on this institution allow them to refusal the perform the specified activity that may be contrary to their understanding of the care of life and health or contrary to the injunction of their conscience, which is binding on them. Norms containing this right are included both in the Constitution, as well as other acts Republic of Poland, as well as the ethical codes of the medical community. As a result of the pressure of leftist and liberal circles, some provisions in the law and ethical codes from recent years have limited ability to use the conscience clause, that these rules are flawed, and by many, also unconstitutional. Discussion about conscience clause should be continued and completed by adoption of the Republic of Poland Parliament a relevant legal standards, that will real protect the conscience of doctors, auxiliary medical personnel, pharmacists, as well as judges and or other health professionals.