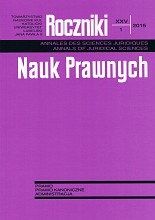 Summary/Abstract: In the context of an active propaganda of gender ideology, which is smuggled also in the wording of the Council of Europe Convention on preventing and combating violence against women and domestic violence out of 11 May 2011, it is reasonable to question: whether in the Polish law, marriage and family are sufficiently protected; whether they are consistently recognized as the basic forms of social life; whether citizens and Christians have a duty to further strengthening the marriage and the family; whether they can promote implementation of solutions present in gender ideology / philosophy. To answer the question, in this article presented an analysis of the following issues: 1) the meaning of marriage and family in the Polish law; 2) characteristics of the gender ideology and its dangers; 3) the position of the Church towards gender ideology; 4) necessity of stronger protection of marriage and family rights. The analysis of these issues leads to the following conclusions: Polish law protects marriage, children and family, but this protection is not fully consistent. Introduction to the legal order of the Council of Europe Convention on preventing and combating violence against women and domestic violence (11 May 2011) will weaken the position of traditional marriage and the family, and can eliminate their protection, which may lead to changes in the Constitution provisions , which protect marriage and the family. In this situation as justified should be considered following actions: raising public awareness, what is the gender ideology and what want its supporters; promoting knowledge of the rights of spouses, parents and families; assisting spouses in the enjoyment of their rights; participation in the making of laws supporting spouses, parents and families in carrying out their tasks.