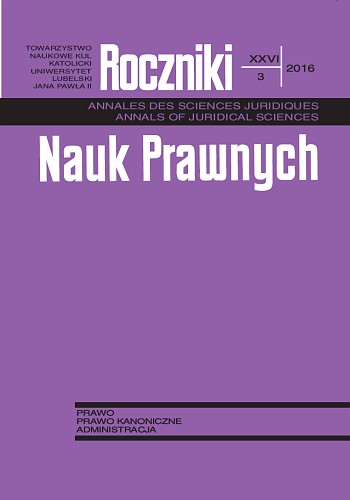 Summary/Abstract: The first paragraph of the article outlines the regulations that govern all types of matrimonial procedures 1) the procedure for nullity of marriage; 2) the procedure for separation; 3) requests to the Roman Pontiff for the dissolution of a non-consummated marriage; 4) the procedure for the declaration of presumed death of a spouse; 5) the procedure for the dissolution of a marriage in favour of the faith of the party who has received baptism.The following paragraphs present a brief analysis of the reform introduced by Pope Francis, which concerns the procedure for nullity of marriage, its context, foundations and fundamental changes. From 8 December 2015, the procedure has been regulated by the Pontiff’s motu proprio, entitled Mitis Iudex Dominus Iesus. It contains several important innovations. In short, it could be said that on its basis the regulation described in Art. 5 § 2 of the Instruction Dignitas connubii on the special authority of the Apostolic Signatura regarding the nullity of a marriage supported by particularly evident arguments, the said authority was extended to all diocesan bishops.It is worth pointing out that the new procedures should be carried out with full respect for the indissolubility of the matrimonial bond. The referral of nullity cases to a tribunal of second instance is no longer compulsory. It is possible to appoint a single judge of a tribunal of first instance. The Pontiff also introduced a new formula for an abbreviated procedure for nullity of marriage cases supported by particularly strong arguments.The article ends with remarks on the prospects for the development of judicial practice in such cases. Time will tell whether the Pope’s ideas regarding the nullity of marriage can be fully implemented.