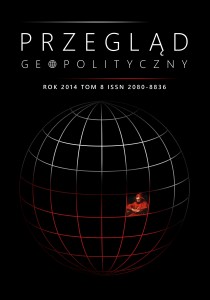 Summary/Abstract: The article by Grzegorz Baziur illustrates some aspects of the geopolitics of the Russian Federation, the Caucasus and ISTHMUS. At the beginning of the author discusses the geopolitics of Russia in the context of the Chechen wars 1994-1996 and 1999, as a prelude to the “restoration of the empire” in the context of the theory of the near abroad countries and the geopolitics of pipelines. After a preliminary analysis of the Chechen wars, the author discusses the geopolitics of Russia in Ukraine during the Orange Revolution, its pressures and interference in the 2004-2005 presidential elections, and the effects of the victory of Our Ukraine. Another part of the article concerns the policy of Russia in Belarus in order to keep it in the zone of influence, which is control of its economy and the support of President Alexander Lukashenko in the fight against the democratic opposition, including the Union of Poles in Belarus in 2005-2006. The third issue is the Russian aggression against Georgia in August 2008, where the author described the causes of the war, the main stages of the fighting, diplomatic efforts of the EU, including countries ISTHMUS and effects of the war. In the final part the author described the context of the “raw material” of Russian geopolitics and fight geoeconomics an area of Central Asia between Russia, the U.S., the European Union countries and China. The text ends with a reference to the geopolitics of pipelines, as the intention of Europe’s dependence on Russian energy resources, and to establishing the Union of Europe, the actual combination of the EU with Russia's planned Eurasian Union.