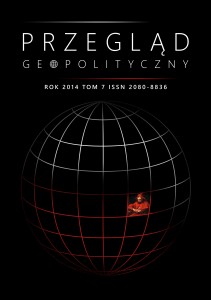 Summary/Abstract: In the first part the author described the circumstances of the independence of Ukraine in 1991, the situation in Ukraine socio-political and economic to the autumn of 2004, the problem of separatism on the line: Western Ukraine - Ukraine East. The main part of the article is dedicated to the Orange Revolution: its causes, the conduct and consequences. The author discusses its course in the period 22 November 2004-23 January 2005, noting the protests and Polish diplomacy, the EU and Russia around Ukraine. He discussed the attitude of the government and the opposition, the role of the Polish and the EU in bringing about a repeat of 26 December 2004 the second round of the presidential election won by the candidate of Our Ukraine, Viktor Yushchenko. In the last part of the text the author showed the decomposition of the camp “orange”, completed in January 2010, the victory of pro-Russian Party of Regions leader Viktor Yanukovych in the next presidential election. In its effect on Ukraine to favor returned oligarchs and Yanukovych's policy towards Russia was more dependable than in 2005-2010. The consequence of his policy was the crisis of the Ukrainian system, completed “Euromajdan” – the second revolution years of 2013-2014 and the collapse of Yanukovych. Its aftermath was the annexation of Crimea by Russia and support is still provided for pro-Russian separatists in the east of the country – but that requires a separate analysis.