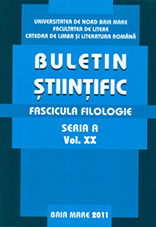 Summary/Abstract: Mendel’s Dwarf is a brilliant novel by Simon Mawer that plays with some of the contemporary issues of anthropology and science, related to the ethics of science, to genetics, to the mission of the researchers, their rights and their limits in unrevealing disturbing truths. The author favours a parallel narrative, presenting in multiple timelines the lives of Gregor Mendel, the discoverer of the gene, and of Benedict Lambert, the dwarf geneticist, who dedicated his research to discovering the gene responsible for his condition. Mawer avoids writing a pseudo-scientific pamphlet, by employing not only the multiple timeline, but also some elements of the picaresque, as we argue in the present article: Ben, as well as his great-great-great uncle are rogues of science, they are at the margins of society because of their social/physical condition, they are both geniuses, they are both amoral, ready to profit from the others’ weaknesses, and they try to better their condition by using others; in doing so, they give a critical insight in their time’s morals and prejudices.