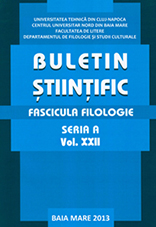 Summary/Abstract: The article start from the history of fairy-tales, especially from the gender roles in fairy-tales and stories for children, taking into consideration a few characteristics of female characters, which have been generalized since and transformed in traits of the female gender. Going further to the concept of the “tomboy”, the study analyzes several facets of this concept, especially in literature that was transposed on the screen in movies and television series. The tropes of this category are, then, followed in various television series and movies, as we consider these as clear mirrors of how mentalities have changed, especially regarding the traits of the specific behaviour of the two genders. Finally, after the author suggests that there are many other titles that can demonstrated the variety of “tomboys” in the realm of Popular culture today, she comes back to the question whether this category still makes sense in our contemporary world; whether it is not only a concept void of content. The study comes to the conclusion that this term has changed, and become a concept that is useful for the genology and typology of today’s Popular Cultre; it is not really a concept belonging to the realm of sociology or psychology, or a term used by mysoginistic theory.